Home » Cartoonist Michael de Adder says he was fired for this

Michael de Adder is the best editorial cartoonist in Canada.

Like cartoons themselves, that’s a subjective statement. His style, which I like, may not be for everyone. His toughness and lack of respect for entrenched power, might not be everyone’s cup of tea. But cartoons are not always meant to be funny. They evoke elements of recognition. The best of them cut right to the heart of an issue. This cartoon depicts the bodies of  Martínez Ramírez and his 23-month-old daughter, Valeria, who drowned while trying to swim the Rio Grande River and enter the United States.

So let’s take it apart. First, there’s the image of the dead people, which already has become iconic. That’s intense, but what the cartoon really captures is the callousness of Donald Trump, who has shown no pity for the thousands of migrants who are being held in detention — some might say concentration — camps in the American southwest in the summer heat. Children have been separated from their parents and left without basics like soap and toothpaste. they sleep in cages, with foil blankets.

Barack Obama also played a lot of golf, probably too much.

So while de Adder’s criticism is tough, it’s not way off the charts. Many people agree with it, which is why the cartoon has gone viral.

Some, like George Takei, have suggested this cartoon deserves a Pulitzer Prize. That’s unlikely but not impossible: Alberta newspapers, led by the Edmonton Journal, won a special Pulitzer during the Great Depression for resisting Social Credit premier Bill Aberhart’s attempt to legally muzzle them.

So it’s an intense cartoon. Why fire the artist?

On Sunday (June 30), it issued a statement saying it is “entirely incorrect” to suggest the company canceled its freelance contract with de Adder because of the cartoon.

“This is a false narrative which has emerged carelessly and recklessly on social media,” the  statement said. “In fact, BNI was not even offered this cartoon by Mr. de Adder. The decision to bring back reader favorite Greg Perry was made long before this cartoon, and negotiations had been ongoing for weeks.” 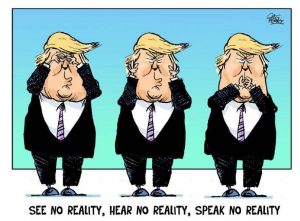 Whatever the truth is, newspapers turn down editorial cartoons all the time. They might think the cartoon is in bad taste. It might seem too over-the-top. It might be too shocking for a family newspaper. Or it might be too politically extreme. It’s the editors’ call, which is a fact of life for anyone who submits material to a publication.

But there’s a big leap from turning down a cartoon and asking for changes, or for a new one, and firing the cartoonist. It’s hard to understand the logic behind that move — if de Adder’s version is true — and to not see it as an over-reaction.

I hope this is one of those straw-into-gold experiences for de Adder, who’s a great guy and a talented artist. The ham-fisted actions of his former employers, New Brunswick Press — the Irving family company that controls the newspapers of New Brunswick — has give de Adder’s work world-wide publicity.

Meanwhile, people in New Brunswick might want to ask tough questions about the quality and bravery of local private-sector journalism, and whether it meets the needs of their community.