The federal government has announced the organizations that will appoint people to the committee that will decide who’s eligible for bailout money.

The lobby group that pushed for the bailout is on the committee. So is the Canadian Association of Journalists, a group that has relatively few members among working journalists, and is mainly made up of, and run by, journalism students and their profs. (Journalism schools are the only places where membership in the CAJ is mandatory or even common.)

Unifor, the union that represents some print journalists, also gets a seat. I am no Andrew Scheer fan, but he made a good point when he posted this on Twitter. It’s a Unifor poster showing the union’s leadership: 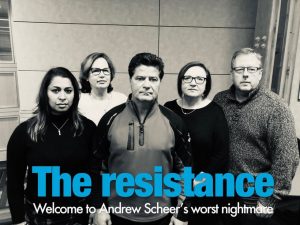 The fourth English-Canada group is a media council representing the ethnic press outside Quebec.

Four Francophone groups, mostly unions, were also given a seat at the table.

There were no representatives of independent and online media.

It’s going to be difficult to see how this won’t be framed as stacking the board to the Left. At the same time, other than the Toronto Star, the biggest bailout recipient will likely be the PostMedia chain. The Unifor and CAJ members will have little choice but to approve PostMedia’s application, since its lobbyists did such a great job of ensuring the program is designed to give it cash.

In the end, the unions may wish they weren’t involved.