Home » The Memoir — victimhood as entertainment

I write non-fiction books. My last one, Bush Runner, was a national best-seller, reaching the number one spot on the CBC’s national list, and charting for weeks on the Toronto Star and Globe and Mail’s lists. It was a great feeling to see it there, not because I was making a lot of money — I wasn’t — but because I knew there were thousands of people across the country sharing in a story that I had written down. I enjoyed discovering the details of the life of Pierre Radisson and the incredible, dangerous world he lived in. The thought of sharing that story with others who were willing to put down money after choosing my book from the thousands of great titles out there made me pretty happy. And I knew, as the book sales stats rolled in, I was gaining the power within the book industry to write what I want.
(It also gave me the ability to budget time to start this site and do a deep dive on some important topics, as well as build up my law practice. That practice is now so busy that I barely have time to do much of anything.)
Bush Runner is, I believe, the best-selling Canadian biography of 2019. But that’s not saying much, since Canadian non-fiction is on the ropes. Most of the non-memoir non-fiction published these days is written by and for academics: exhaustive, poorly-written and designed books that are not written to be read, but to gain prestige, tenure and promotion within academia. 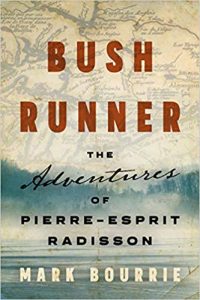 Commercial houses don’t want Canadian non-fiction unless it’s about pop culture or sports. Serious non-journalistic political books, with a few exceptions like David Moscrop’s “Too Dumb for Democracy,” rarely find a publisher. The large publishers have no idea how to handle Canadian history, and Canadian media doesn’t get it at all. I shudder every time I see a reviewer fall back on the lame theme of “I thought Canadian history was dull but wow! this is a great story.” Canadian history isn’t boring. I can think of a half a dozen great Canadian stories that would make an enthralling book or Netflix series. I wish I had the time to write them, but I feel a strong need to build a law practice to protect free expression and other democratic rights.
Good Canadian stories, well-told, should sell like crazy — if people hear about them. My book did quite well. People like Charlotte Gray, Peter C. Newman and Pierre Berton have sold a lot more books than I ever will. Times did change, though: there is no mass media, other than CBC Radio, with the power to get the word out. Many, many books of all kinds are written, edited and printed without a serious chance of even making it into a book store. We will never hear about them. Many more will not be written because writers cannot afford to pay to create researched accessible mass-market non-fiction about Canada, and no one else will pay them to.
Most Canadian literary gatekeepers don’t care about Canadian historical stories. I am not sure why. It could be our national self-loathing, the same insecurity that makes us unable to make great movies. Some of that is generated by Canadians. Some is reinforced by Americans, who are willing to make movies in Canada but only after hanging American flags on the streets of Toronto, Vancouver, and places like Port Hope.
It could be because our publishing industry, which is dominated by a handful of international corporations, has its eye on Manhattan, not Kitchener. It might also be because the class of people who work in publishing — young, downtown Toronto people, usually from wealthy families (publishing pays so poorly that it’s more of a hobby than a business) — see Canada itself as unimportant and unsophisticated.
But this clique feels it must virtue signal, and it uses a genre that became popular in the States a couple of decades back: the victim memoir. These tend to follow a formula: The story of a _________ growing up _______ in northern ________. They are actually Horatio Alger books. They’re about how the author overcame some great obstacle — racism, transphobia, a physical or emotional disadvantage — and came out of it a solid, whole person.
And more power to anyone who does. But is telling the story really a form of art? Is it the only valid literary non-fiction? And is reading it anything but voyeurism? There are some truly great memoirs out, truly inspiring books, like Jesse Thistle’s From the Ashes and Amanda Jette Knox’s Love Lives Here. My favorite has been my publicist and friend Casey Plette’s Little Fishes. There are also a lot of books that are simply narcissistic trash. No one will dare call them that. Not today. Not in this environment.
Let’s go a little deeper into this.
I have no intention of writing a memoir. First, my life isn’t that interesting to other people. Like everyone else, I’ve struggled with my own demons. I’ve had an interesting-enough life, about as exciting as I wanted it to be. I’ve seen some dysfunction around me. But if I did discover some kind of hook in my life story that would make a good memoir, I wouldn’t write it.
Why not? Partly I would have a hard time with the truth. I doubt anyone could have greater cognitive dissonance and bias than in telling their own story. It would also be an outrageous violation of the privacy of my family, friends, and anyone who showed up in the narrative. If, say, I was raised by a single mom in some cabin in the woods, do I have the right to expose her parenting to the world? If I accused people in my family of some gross fault, would I have the right to tell my story when they have no chance to explain their side?
Then there are the issues of accuracy and honesty. Memoirs aren’t fact-checked. The harder the luck and the sadder the story, the more interesting the memoir. And, since a memoir is an intensely personal and very emotional piece of writing, “facts” that are obviously false can be excused away as part of the writer’s impression of events.
There is one upside: memoirs do cast light on important issues such as the impact of colonialism and racism, on discrimination based on gender, sexuality, class, disability. In that way, they can be important cultural artifacts. And this is just my own taste: there are people who strongly believe I am wrong. I believe there is room at the table for everyone.
But I believe memoirs that are not contextualized with research are not the only way, or, with some fantastic exceptions, an effective way, to tell the whole story of Canada, and I’m afraid that story isn’t being told very often, and it usually isn’t told all that well. And if we don’t know our own story, we’re simply Americans living on the wrong side of the border.

(I have updated this post to flesh out some ideas that I think I did not express well and to add nuance that I believe I missed when I first wrote this piece.)